Well, being a basketball player is no joke. You need to have some exceptional skills, and Allen Iverson had them all. Sure, there were ups and downs in his 14 years of NBA career but thank God he got that fabulous deal with Reebok and signed a lifetime contract. Where was he led then? What benefits did he get? What hurdles did he face?

Allen Iverson was born to a single 15-year-old mother Ann Iverson on June 7th, 1975 in Hampton, Virginia. He went to Bethel High School, where he played as a quarterback for the football team and point guard for the basketball team. That’s not all, Allen led both teams to the Virginia State Championship! However, his life has not been a series of memorable events either.

Allen was imprisoned at the age of 17 because of the fight between the White and Black crowd that took place at a bowling alley in Hampton, Virginia. During the fight, Allen Iverson was rumored to hit a woman with a chair on her head. He was forced to complete his high school from Richard Milburn High school (a school for at-risk students) by a prison sentence.

Allen didn’t give up and spent three years there which impressed Georgetown University’s head coach John Thompson who personally met Allen and granted him a full scholarship to join the Georgetown Hoyas Basketball team.

It was in 1997 that Allen and his friends were stopped by the police for speeding late one night. He also got arrested for having a weapon and for the possession of marijuana. He later recorded a rap song in 2000 which was called ‘40 Bars,’ but he never released the album because of its arguable lyrics which were highly criticized.

He got married in August 2001 to his High School lover Tawanna at the Mansion in Voorhees, New Jersey. Later in 2002, he was rumored to have thrown Tawanna out of the house because of a domestic dispute. Allen’s wife filed a lawsuit in 2010 for the custody of their five children with child support and alimony payments.

Allen Iverson started his professional career in 1996. He was selected by the ‘Philadelphia 76ers’ in the 1996 NBA Draft. Allen soon came to be known as NBA’s most valuable player because of his victories. Soon after, Larry Brown left the team in 2003, and Allen got the position of co-captain in the 2004 United States Olympic men’s basketball team. Later, he joined the ‘Denver Nuggets’ team from 2006 to 2007. 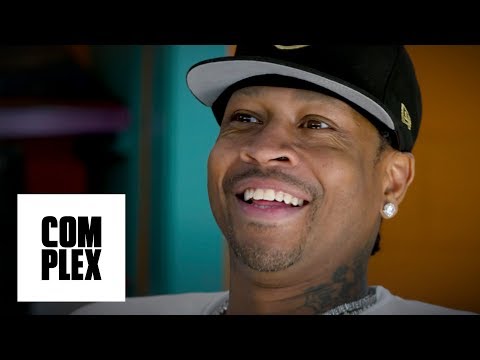 After this, he joined the ‘Detroit Pistons’ and ‘Memphis Grizzlies’ from 2008 to 2009 but came back to the ’76ers’ in the end. Allen Iverson was offered to play for the ‘Texas Legends’ in 2013, but he rejected. He officially announced his retirement from basketball on 30th October 2013 and received a standing ovation in the ‘76ers‘ season home opener. Allen stated that he would always be a 76er until he died.

Allen Iverson Net Worth & Earnings in 2020

As of 2020, Allen Iverson’s net worth is approximately $1.5 million. His lifetime contract with Reebok pays him around $1 million per year with a large amount of $32 million on the way for his 55th birthday. His NBA career profited him a lot with his salary being totaled to $155 million.

Despite his height being 6 foot tall, he was never fit to become a Basketball player with all the trouble he got into as a young teenager. Yet he became a person who received a standing ovation at his retirement and a player who helped NBA reach its success. From being broke to being the face of Reebok, NBA MVP, an Olympic medallist and what not. Allen’s life proves that hard work always pays off no matter the circumstances.