With a peaking career in the film industry, Boris Kodjoe is one actor whose name has come to be celebrated by many. His appearances in many films and television works have not only solidified his career in Hollywood but have also earned Kodjoe a good amount of wealth over the years.

Boris Frederic Cecil Tay-Natey Ofuatey-Kodjoe was born on March 8, 1973, in Vienna, Austria. He is a son to Ursula and Eric Kodjoe. His mother was a German psychologist of partially Jewish descent while he father was a Ghanaian physician of the Krobo people. The parents of Boris divorced when he was six years. He grew up in the area of Freiburg in Breisgau. He has two sisters named Nadja and Lara and one brother named Patrick.

Kodjoe went to Virginia Commonwealth University thanks to a tennis scholarship. After completing his studies, Boris graduated in 1996 with a bachelor’s degree in marketing.

Boris Kodjoe married Nicole Ari Parker, his Soul Food: The Series co-star, on May 21, 2005, in Gudelfingen Germany. Parker had earlier on March 5, 2005, given birth to their daughter Sophie Tei-Naaki Lee Kodjoe. Their son, Nicholas Neruda Kodjoe was born on October 31, 2006. The family resides in Los Angeles, California and Kodjoe and his wife are members of Cascade United Methodist Church in Atlanta. 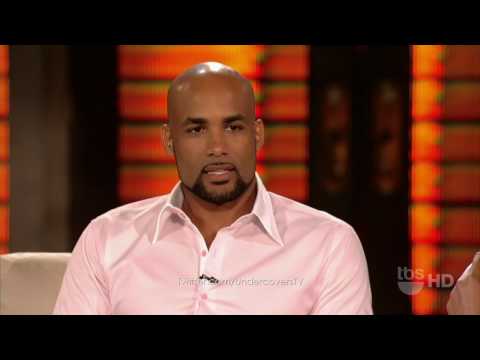 Boris Kodjoe initially had aspirations of becoming a tennis player. However, a back injury cut his dreams short. Luck was on his side as Kodjoe was quickly signed as a model and soon after entered acting. He was first featured in TLC’s Red Light Special music video in 1995. Kodjoe’s first appearance on television was in an episode of the TV program The Steve Harvey Show in 1998. Following that he was cast as Damon Carter in the show Soul Food in 2000. He then appeared in the 2002 film Brown Sugar and also starred in the sitcom Second Time Around.

In 2005 Kodjoe played the role of David Taylor in the October 2005 film The Gospel. This was followed by several other roles in Nip/Tuck, Undercover, Resident Evil: Afterlife, and Franklin & Bash. He began starring in the BET comedy parody series Real Husbands of Hollywood in 2013. During this time he was also featured in the movies Baggage Claim and Nurse 3D. The actor was cast as a regular on the ABC primetime soap opera Members Only created by Susannah Grand in 2014. Kodjoe also took on a recurring guest star role in Fox’s The Last Man on Earth television series.

Boris Kodjoe Net Worth & Earnings in 2020

As of 2020, The German actor and former model can smile to the bank as he has an estimated net worth of $10 million. Boris Kodjoe has made a good amount of his wealth through his acting career, appearing in many films and television series. He also got a huge chunk of money from his years of modeling.

Boris Kodjoe is not only recognized for his talent in acting but also for his work in the modeling industry. People Magazine in 2002 named him one of the 50 Most Beautiful People in the World. There is still more to come from this handsome and talented actor.