Regardless of his small start in the film industry, appearing in only low cut budget cult films, Bruce Campbell has risen to stardom and is now among the A-list names in Hollywood. The American based actor, comedian, writer, director, and producer has achieved jaw-dropping success throughout his career.

The multi-talented Bruce Lorne Campbell was born on 22nd June 1958 in Royal Oak, Michigan, to parents Joanne Louise Pickens Campbell and Charles Newton Campbell. His mother was a homemaker and father a part-time actor and also a traveling billboard inspector. Bruce was brought up in Birmingham, Michigan. He has two older siblings namely Don and Michael Rendine who is his half-brother. Bruce has Scottish roots.

In most celebrity relationships, there never lacks some drama, and most celebrity couples in Hollywood often have a track of divorce. Well, Bruce Campbell is one of them. The actor has been married twice in his relationship life. In 1983, he married his first wife, Christine Deveau. The couple was blessed with three children namely Rebecca and Andy, but their marriage ended after six years in 1989.

He then moved on and married Ida Gearon, who is a set and costume designer, in 1991. The two are still married to date, living together in their home in Jacksonville, Oregon. Bruce is also a certified ordained minister and has officiated several marriage ceremonies.

Bruce Campbell’s career had an early kick-start during his teenage years. While in High School, he made two short Super 8 movies with his friend, Sam Raimi. The two formed a perfect friendship and went on to make movies together. While in college, they collaborated in creating a 30 minute Super 8 version of the first “Evil Dead” film which was used initially to catch the eye of investors. 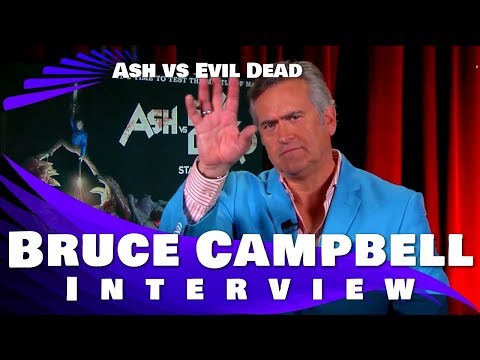 In 1981, Raimi wrote, directed and edited The Evil Dead movie which starred Bruce Campbell. Though the film did not do well, it earned the endorsement of renowned horror-fiction writer Stephen King and this was the initiation of the movie’s popularity.

Post The Evil Dead, Campbell took roles in several other movies that included Cleveland Smith: Bounty Hunter, Thou Shall Not Kill and Crimewave which received relative commercial success. It was his iconic role in “Evil Dead” series of Ashley J. “Ash” Williams that was the beginning of his breakthrough in the film industry.

This series is said to have given birth to the genre of horror comedy. He continued to feature in more movies following that. Bruce has also had noticeable recognition in American Television by appearing in series like “Jack of all Trades”. He has also done voiceovers in movies like “Cars 2”.

He is also a writer, and he launched this part of his life in 2002 with the release of his autobiography and also his fiction book in 2005 titled “Make Love! The Bruce Campbell Way”. Bruce also holds various awards and has been nominated in many categories over his career. In 2017 he won the Best TV Actor award in the Fangoria Chainsaw Awards.

Bruce Campbell Net Worth & Earnings in 2020

As of 2020, Bruce Campbell has managed to earn himself a fortune of $11 million which is estimated to be his net worth. He has made his fortune through his works and appearances in several TV Series and also films. Being ranked one of the highest paid actors, Bruce enjoys the luxury of a lucrative salary which has contributed to his rise in the millionaire circle.

Bruce Campbell is one of the few celebrities that has managed to keep his private life away from the media and bring attention to his work. With his personal and work ethics, his concentration on his career continues to bring him a great deal of success and to cement his legacy in Hollywood.