Known for appearing in the reality TV series, ‘The Real Housewives of Orange County’, Heather Dubrow has been performing since 1994. In a career span of over two decades, she has appeared in many TV shows as well as films. She has also hosted TV shows and has been in the main role.

Heather Paige Kent was born in the year 1969. She is the daughter of Conrad S. Kent and was born in The Bronx, New York City. She is a Jewish and has got Polish, Hungarian, and German ancestry. The actress was raised in New York’s Chappaqua. She has a sister named Schuyler Kent. Her father died in 2017.

Not much is known about the childhood details of Heather Dubrow. But she went to the Syracuse University in New York for her Bachelor of Fine Arts degree. She was very beautiful and smart and was the winner of the 1989 Miss Greater Syracuse. She also entered the Miss New York beauty pageant, where she was adjudged as Miss Congeniality.

Heather has been successfully married to plastic surgeon Terry J. Dubrow since 1999. Her husband is the brother of Kevin DuBrow. Their relationship has been going strong for the last 18 years, and they are the parents of four children. Their twins, Maximilia and Nicholas were born in 2003. They also have two other daughters named Katarina and Collette.

In 1994, Heather Dubrow appeared in an episode of ‘Married… with Children’. Her performance in the show got noticed and soon she was seen in the TV movie, ‘Roseanne and Tom: Behind the Scenes’. After guest appearing in another TV series, she soon appeared in ‘Life with Roger’ from 1996 to 1997. Her zeal to perform as an actress, he made her appear in many episodes of the TV series ‘Jenny’. She soon appeared in the television film, ‘Carly’. 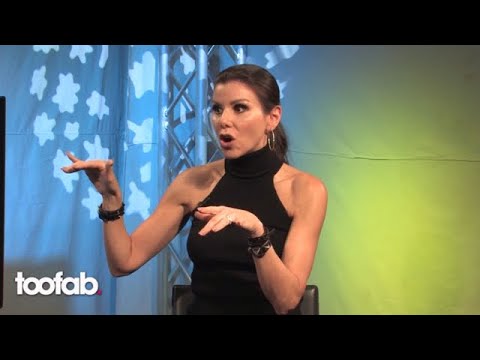 Dubrow’s television career became even more popular when she starred as Margaret “Maddie” Keller in ‘Stark Raving Mad’ from 1999 to 2000. If that was not enough, she appeared in the main role of Lydia DeLucca from 2000 to 2002. However, she rose to even wider prominence after appearing in ‘The Real Housewives of Orange County’ from 2012 to 2016. This role made her become popular and soon she became a household name in the USA.

But despite appearing in many TV shows, Dubrow has not won an award nor received a nomination. Her television credits include, ‘Young & Hungry’, ‘Sequestered’, ‘Hawaii Five-0’, ‘Hot in Cleveland’, ‘Malibu County’, ‘Marie’, and ‘Surviving Suburbia’. She has also acted in the 2002 film called ‘Now You Know’. Additionally, her immense talent and personality have made her serve as the co-host of the shows, ‘Botched Up: Post Op’ and ‘Good Day L.A.’.

Heather Dubrow Net Worth & Earnings in 2020

How much do you think will be the net worth of a person who has been performing for over two decades? You definitely would like to know her total income throughout her career. As of 2020, She has amassed a fortune of $40 million from her career as an actress. That’s a very handsome salary for someone who has not even received an award. Still, she owes this money as she is very hard working and is also very talented.

Heather Dubrow is a very popular name in the television industry. She has also made her appearance felt in a film. We can expect to see her star in many TV series in the near future.