Miss USA 1993, Kenya Moore is an American model, actress and a movie producer involved in various hit projects. She gave her appearance in the reality TV shows The Real Housewives of Atlanta and The Celebrity Apprentice 7, which made her famous among the TV audiences.

But do you know how much is Kenya Moore’s net worth in 2020 and how old is she? If you do not know, we have prepared the following article in which you can find everything that interests you about Kenya Moore’s life and career. We have prepared this article for you not only about details of Kenya Moore’s career, professional life and personal life, but also about her net worth, age, height, weight and more facts. Well, if you’re ready, let’s start.

Kenya Summer Moore was born on January 24th, 1971, in Detroit, Michigan, the United States to Patricia Moore and Ronald Grant. Being teenage parents, Kenya’s mother abandoned her when she was just three days old. Her aunt and her paternal grandmother Doris Grant were the people who raised Kenya after her abandonment. She attended the Cass Technical High School and later completed her degree in psychology at the Wayne State University.

Kenya has been highly known for her infamous relationships with a couple of men from industry. Kenya Moore married businessman Marc Daly in 2017 after dating him for a year. Moore kept her relationship with him very secret, and their marriage was also a secret event. Before getting married to Marc, Kenya Moore was dating Matt Jordon for a year previous to which she was in a relationship with boxer Mike Tyson. In 2018, it was announced that Moore and Marc are expecting their first baby.

Kenya started her career as a model when she was 14 years old. In 1992, she became the cover girl of the magazine, Ebony Man’s, following which she modeled for the cosmetic line Ebony Fashion Fair. 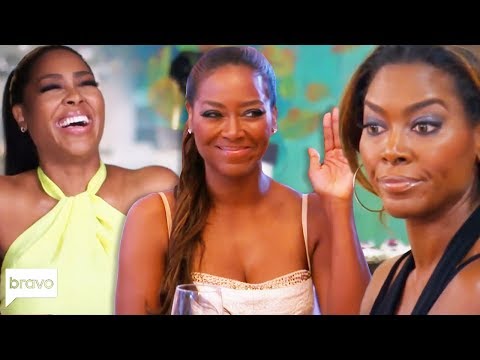 At the age of 22, she claimed the Miss Michigan USA title which led her to participate in the 1993 Miss USA competition. She then represented the USA for Miss Universe pageant where she stood at 6th place.

Before winning the Miss USA title, Kenya has appeared in the TV series in which she did only small parts. After her beauty title, she made appearances in various famous TV shows.

She featured in the covers of various magazines and appeared in the music videos too. In 2012, she was included as the cast member of the TV show The Real Housewives of Atlanta and in 2015 gave her appearance on the Celebrity Apprentice 7. This was the highlight and limelight in the career of Kenya Moore which gave her much required fame and name.

She has also appeared in various popular movies and has even produced movies such under her production company Moore Vision Media. She published her book Game, Get Some! in 2007 and released a workout video in 2013.

Kenya Moore Net Worth & Earnings in 2020

Her salary per season for featuring in the Real Housewives of Atlanta is said to be $600,000. She owns a luxurious Bentley GTC whose worth is expected to be around $225,000. As of 2020, Her net worth considering her successful career is estimated to be $1 million.

Kenya also owns her production company and have produced two movies under the banner. Having her own hair care brand named, Kenya Moore HairCare, Kenya draws a good amount of fortunes from her company as well. Kenya is featured in the next season of the Reality TV show after 2012, the Real Housewives of Atlanta which added onto her net worth.

From a daughter abandoned by her own mother to becoming the second African American to wear the Miss USA crown, the achievements of Kenya Moore is highly inspiring, thanks to her grandmother and her aunt for raising her with such determination and grit. She has made her name in the entertainment industry with no backup or support from industry.