Michael Pena is an American actor and musician who has appeared both in films and television. Though he has been appreciated and awarded in many films, he is best known for the role in the movie Ant-Man, starred in 2015 and sequel in 2018. A fabulous actor whose contribution to American cinema is huge and has achieved a lot throughout his career.

Pena was born as Michael Anthony Pena, on January 13, 1976, in Chicago, Illinois. Michael was born to Nicolasa, a social worker and Eleuterio Pena, a factory worker.

His parents were originally farmers who had emigrated from Mexico. Michael grew up in North Lawn area and attended Marist high school. Later his parents shifted within Chicago and moved to West Lawn area where Pena attended the Hubbard high school.

Pena’s love life is not much in the limelight. During his acting career, he was dating his then-girlfriend, Brie Shaffer. Spending a few years together, the couple realized their love and affection for each other, and finally married in 2006.

Michael and Brie have a son named Roman who was born in 2008. Pena is very much happy with his personal life and resides with his family in Los Angeles, California.

Michael Pena had been into films by early 1994, My Fellow American, Boogie Boy, being some of his early movies. However, his breakthrough performance was in Million Dollar Baby and Crash, in 2004, which were written by Oscar-winning Paul Haggis. After these movies, Pena received attention, and he won the ALMA Award for Outstanding Actor for his role in Crash. 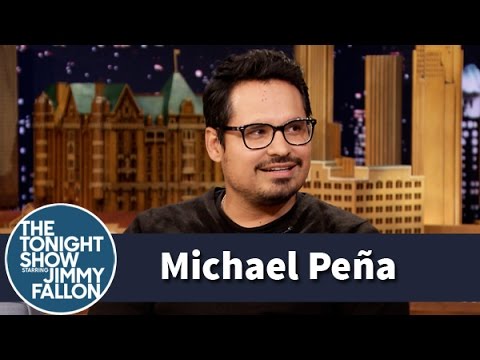 Later, in 2006, he was again nominated for ALMA Award for his film, World Trade Center, a movie based on September 11, 2001 attacks. His brief role in Alejandro Gonzalez Inarritu’s film Babel was also much appreciated. Pena is one of those actors who have a rare distinction of having appeared in three consecutive Oscar-nominated films.

In 2012, he was seen in a biopic of Cesar Chavez, founder of the United Farm Workers. He has also worked with Brad Pitt, Logan Lerman and Shia LaBeouf in Fury, in 2014. His character Luis from Ant-Man, in 2015, and the sequel in 2108, has gained him huge popularity and love from across the world.

He has also been an executive producer for movie chips, in 2017. Presently, he is working on the post-production of The-Mule which will release in December 2018.

Michael Pena Net Worth & Earnings in 2020

Michael Pena ha an estimated worth of more than $15 million. This tremendous success is the result of his hard work and dedication towards cinema for over two decades now. Pena has been an outstanding actor and has appeared in more than 50 movies and television shows, in his acting career.

Pena has also been an executive producer for one of his movies. Ant-Man character Louis has been so much appreciated that it has been characterized in Lego Marvel’s Avengers video game.

With such an illustrious career, Michael Pena’s talent has been growing ever since, and his stardom too. He will be known for his acting skills and the performances that leave an impression on the hearts millions across the globe.