Micky Arison is a well-known Israeli-American businessman who currently is the chairman of the world’s largest cruise operator ” Carnival Corporation & plc“. He was also the CEO of the company until Arnold W. Donald replaced him in the year 2013.

Micky Arison was born in Tel Aviv, Israel on June 29, 1949. He father Ted Arison is the co-founder of the Carnival Corporation. He has twos siblings including one sister Shari Arison and a brother Kames Arison. Arison went to the University of Miami to complete his education but later dropped out to work in his father’s company.

Micky Arison is married to Madeleine Arison. Together they are the parents of two children. His son Nick Arison is the chief operating officer (CEO) of the basketball team Miami Heat.

Micky Arison’s career kicked off in the year 1972 when he decided to drop out of college and work in the sales department of his father’s Carnival Cruise Lines company. After working for two years, he was made the reservations manager of the company. His work was to plan new strategies to grow their business further. 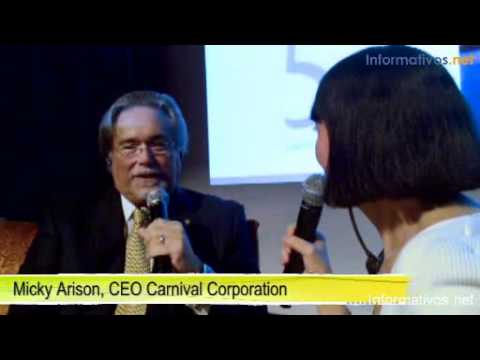 Arison created a new affordable pricing plan to attract young customers as well as old people who had never been on a cruise. In 1976, Arison was appointed as the vice president of passenger traffic, and after three years he was made the new President of the company.

To increase the business, he made the company public in the year 1987. In the first IPO (initial public offering) the company received more than $400 million which helped the company to expand its operations.

Later, Arison bought the world’s oldest and famous cruise line “Holland America”. In 1990, he was made the new CEO of the company after his father stepped down from the position. After becoming the head of the company, Arison acquired two of the biggest cruise line Seabourn Cruise Line in 1992 and Costa Cruises in 1997. By the end of 2001, the company had more than 25 cruises, and with the market share of 25 percent, it became the world’s largest cruise company.

Arison is also the owner of the basketball team “Miami Heat” which he bought in the year 1995. He was awarded the “Seatrade Personality Award” in 2003.

Micky Arison Net Worth & Earnings in 2020

As of 2020, Micky Arison has an estimated net worth of more than $10 billion. He was ranked 169 in the list of ” Top Wealthiest people in the world” by the Forbes magazine in the year 2011. He bought the basketball team, Miami Heat for $68 million in the year 1995. Arison also owns the “Crystal Palace Resort and Casino” in the Bahamas which is worth $250 million. It is said that he sold more than $100 million of his company’s shares in 2003.

Micky Arison is one of the most popular businessmen in the world. He has always given importance to the company’s marketing strategies and was able to grow the company’s fleet from just two ships to more than hundred before stepping down as the CEO of the company in 2013.