When mentioning the names of prominent American people in business, that of Roger Goodell is bound to come up. For more than a decade, the man has been the Commissioner of the National Football League. It would be great to know the life story of this iconic figure. That way, one will understand why even commentators refer to him as the most powerful man in sports. We are about to unveil necessary information regarding him.

Roger Goodell was born in 1959 on 19th February. His full name is Roger Stokoe Goodell. His place of birth was Jamestown in New York. He was born to Charles Ellsworth Goodell together with Jean Goodell. Jean hails from Buffalo in New York. Roger’s father was a U.S. representative and later a Senator of the United States. Goodell was born along with his four brothers. They include Michael Goodell and Tim Goodell. Andy Goodell, the member of the New York State Assembly,

When Roger reached the school going age, his parents enrolled him in school. He attended Bronxville High School. During his stay in the school, Goodell played baseball, basketball, and football. In addition to that, he was the captain of those teams. That explains why Roger was the school’s athlete of the year when he was a senior.

He then joined Washington & Jefferson College. It is in Washington, Pennsylvania. Due to the injuries that he had incurred before entering college, he did not play football while in college. Goodell graduated in 1981 with a degree in economics.

Roger Goodell has been the husband of Jane Skinner for more than two decades. The two exchanged their marriage vows in October 1997. Skinner was once an anchor at Fox News Channel. In 2001, the couple welcomed twin daughters.

Goodell’s NFL career began in 1982. At that time, he was an administrative intern. His attachment was at the New York’s league office. During his internship period, he worked under the supervision of the former commissioner, Peter Rozelle. The following year, he became an intern at the New York Jets. After staying there for a year, he went back to the league office. He would work as the assistant of the public relations department. 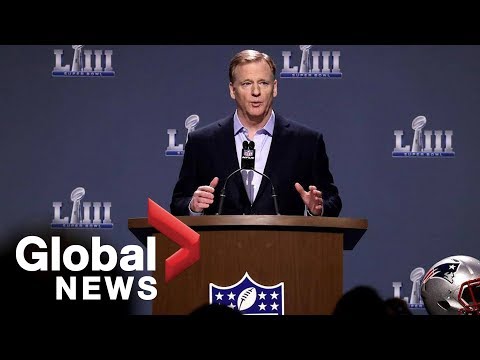 In 1987, he became the assistant of Lamar Hunt. Hunt was the president of the American Football Conference at that time. In December 2001, he became not only the Executive Vice President but also the Chief Operating Officer of NFL. Then, he became the league’s commissioner. His predecessor was retired commissioner Paul Tagliabue.

He was chosen as the commissioner in August 2006 on the 8th. However, he assumed office in 1st September of the same year. His new tenure begins in 2019. That is after signing a new contract in 2017 on 6th December. His administration has been felt ever since.

Roger Goodell Net Worth & Earnings in 2020

As of 2020, The net worth of Roger Goodell is over $80 million. Ever since he left college, his career has mostly been based in the NFL. With one promotion after another, his earnings kept increasing. That is how Roger has managed to accumulate the wealth mentioned above. As of now, he is still working as the Commissioner of the NFL. Therefore, there are high chances that the figure will keep increasing.

Roger Goodell is one of the longest-serving officials of the NFL. Were it not for the injuries; maybe he would have become a player. Nevertheless, his career path is a success. He chose his career, and it turned out well. As the Commissioner of NFL, he has made a significant impact.