Shepard Fairey is a famous and well-known American street artist, illustrator, and graphic designer. He is most renowned for his emergence from skateboarding and launching ‘OBEY Clothing.’ He became well-known for his poster ‘Hope’ during the 2008 US Presidential election for Barack Obama.

Shepard Fairey (Frank Shepard Fairey) was born on 15th February 1970 in Charleston, South Carolina, the US. His parents are Strait Fairey (doctor) and Charlotte (realtor).

Shepard Fairey studied at Wando High School. Since 1984, Shepard Fairey began drawing on skateboards and T-shirts. Shepard Fairey completed his high school education from Idyllwild Arts Academy in Idyllwild, California (1988). He graduated with Bachelor’s of Fine Arts in Illustration from the Rhode Island School of Design (1992).

Shepard Fairey and Amanda are married, and they have two daughters named Madeline and Vivienne. The family resides in Los Feliz district of Los Angeles. Shepard Fairey has Type 1 diabetes. Under the names DJ Diabetes and Emcee Insulin, Shepard Fairey performs as a disc jockey at several clubs.

Shepard Fairey’s quotation ‘Andre the Giant Has a Posse’ during the sticker campaign made him popular. He had made appropriate illustrations for the Weekly World News. Using the same quotation, Shepard Fairey created another image. It went viral in America and on street signs, billboards, and walls (the 1980s). 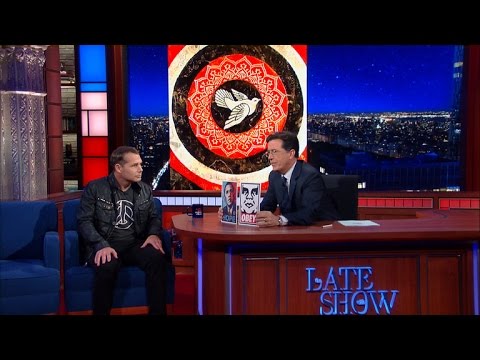 Shepard Fairey used the image and added the word ‘OBEY’ to create his logo and brand. He combines left-wing politics with his appropriate images and graphic designs. Shepard Fairey presently works as an artist and advertising designer at a gallery in Los Angeles. Also, he works in collaboration with other businesses to create fashion and skateboards.

In January 2008, Shepard Fairey distributed his poster ‘HOPE’ during the campaign of the US Presidential election of Barack Obama. The year after, the same poster was displayed in the National Portrait Gallery, Washington, D.C.
Shepard Fairey has appeared in several documentary movies. He was in Helen Stickler’s 1997s ‘Andre the Giant Has a Posse’ and in 2007s ‘Bomb It!’ Also, his work has been recorded in books entitled ‘Supply and Demand.’

Shepard Fairey Net Worth & Earnings in 2020

As of 2020, The net worth of Shepard Fairey is $18 million. Most of his wealth comes from his profession as an illustrator and street artist. He became famous and earned fortune after creating Andre the Giant Has a Posse. He associated with sticker campaign and later with 2008 US Presidential campaign of Barack Obama. Shepard earns from his alternate graphics printing shop. He co-founded the design studio BLK/MRKT. Along with his wife, Amanda, he founded the Number One design agency for creating posters for movies and covers for records.