Tony Shalhoub is a professional actor from America who is best known for playing the role of detective Adrian Monk in the comedy-drama television series “Monk”. He has also appeared in many movies including Big Night (1996), Galaxy Quest (1999), Men in Black (1997), Teenage Mutant Ninja Turtles (2014) and many more.

Tony Shalhoub was born on October 9, 1953, in Green Bay, Wisconsin to Joe and Helen Shalhoub. His father was a meat peddler, and his mother was a homemaker.

He went to the Green Bay East High School where his older sister made him a part of the theatre group of the school. During a rehearsal of the school’s play, he fell off the stage and broke his leg, but he recovered quickly and performed the final play of the year.

Shalhoub attended the University of Southern Maine where he earned his degree in drama. In 1980, he completed his master’s degree from the Yale School of Drama.

In 1992, Shalhoub married Brooke Adams who is a popular and well-known actress. The couple adopted two daughters Josie Lynn (born 1989) and Sophie (born 1993).

Tony Shalhoub started his career in the year 1985 when he made his Broadway debut in Neil Simon’s play “The Odd Couple”. In 1992 he featured in Herb Gardener’s play “Conversations with My Father” which earned him his first nomination in the Antoinette Perry Award. 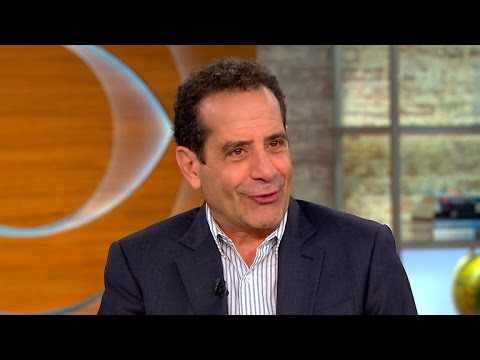 Shalhoub’s first role in television was of a cab driver in the sitcom “Wings” in the year 1991.

In the same year, he appeared on the show “The X-Files” in which he played the role of physicist Dr. Chester Ray Banton.

He is also seen in many movies playing various character roles like of a fast-talking lawyer in the movie “The Man Who Wasn’t There”, a businessman in the comedy-drama movie “Primary Colors”, Jack Jeebs in the movie “Men in Black”, a widowed father in the supernatural horror movie “Thirteen Ghosts” and many more. Shalhoub played the role of a detective with obsessive-compulsive disorder in the comedy-drama television series “Monk” which aired on the USA network.

Shalhoub won three Emmy Awards in the category of “Outstanding Lead Actor in a Comedy Series” for his work in Monk. He also won a Golden Globe Award and two Screen Actors Guild Awards for the same.

Tony Shalhoub Net Worth & Earnings in 2020

As of 2020, Tony Shalhoub has an estimated net worth of more than $35 million. This huge wealth is the result of his outstanding career as an actor.

He also narrated the children book “The Cricket in Times Square” for which he earned a nomination in the 2008 Grammy Awards.

Tony Shalhoub is considered one of the finest and renowned actors in the world. He provided the voice of Splinter in the superhero movie “Teenage Mutant Ninja Turtles” which was released in the year 2014.