Vincent Jamal Staples is a renowned actor and rapper who work with the popular group Cutthroat Boyz for the last few years. This amazing personality signed with the Def Jam Recordings, Blacksmith Records, and ARTium Recordings. His song with fellow rappers Joey Fatts and Aston Matthews has become very popular among the audience. This hip artist is only 25 years old and achieved so much success in the music industry.

This amazing rapper was born on 2nd July 1993 in the beautiful city of Compton, California. However, his family soon moved to the North Long Beach because of the higher crime ratio in the city. Vince’s family was so poor, and that’s why he had spent the majority of his childhood in poverty. Staples is the youngest son of their parents who have five other siblings, including two boys and three girls.

Staples has attended Optimal Christian Academy till 8th grade and then moved to Atlanta where he studied for some time. After that, Vince studied in Mayfair High School, Jordan High School, Kennedy High School, and Esperanza High School. He has not attended college and didn’t have a bachelor degree.

Vince is happily living with his family in Southern California. There is no information available about his relationship or girlfriend in the media. He has stated in many interviews about never trying alcohol or drugs in his life. Vince is a great follower of a straight edge lifestyle that can see in his personality.

He offers help to the YMCA program through which young individual get benefitted. There is no clear information available about the donation that he has made to this institute. He has a spent a great time of his life in poverty, and that’s why he helps the community.

Staples start his career participating in a music tour to Los Angeles along with the Dijon LaVish Samo who discovered him. He featured in some videos of the Syd tha Kyd and Earl Sweatshirt as Staples never thought to become a rapper in the start. He made his debut with a single “Shyne Coldchain Volume” that releases on 30th December 2011. It was followed by another mixtape that released in 2012 and produced by the Michael Uzowuru. 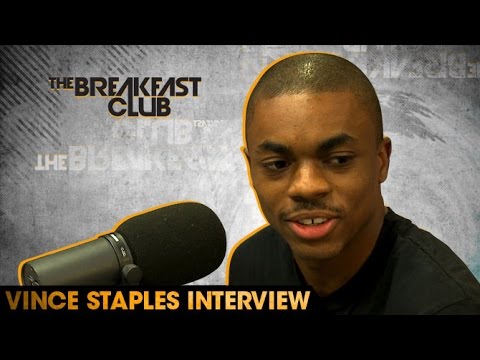 However, Vince has to wait for many years for the release of his debut album that released in 2015. It was named Summertime ’06 and distributed by the Blacksmith Records, Def Jam Recordings, and ARTium Recordings. It sells more than 13,000 albums within the first week of its release. Vince’s second album “Big Fish Theory” released in the year 2017 and was a huge success. In addition to rapping, he has worked in some movies like Sprite, Prima Donna, and Dope.

Although he had nominated in many awards since getting popular in the music industry, but only become successful in winning one BET Hip Hop Award in 2014.

Vince Staples Net Worth & Earnings in 2020

As of 2020, The net worth of Vince Staples is $5 million that is huge considering his young age. He is an amazing artist and works as a part of many music groups. Also, Vince’s albums have sold lots of units that contribute to his earnings. Also, he appears in the advertising of Sprite that allows him to increase net worth.

Vince Staples has reached to fame in a short span of time due to his talent and skills. He has a long way to go, and we believe Staples will continue his good work in upcoming years.

We provide you with the latest gossip, news and videos straight from the celebrity world.
Contact us: [email protected]0ssip.com
© Copyright 2019-2020 ! Celebwikigossip.com